Hello gang.  This week I, The Vern was able to catch a few flicks now playing at the Minneapolis/St. Paul International Film Festival  aka MSPIFF(visit link to learn more) This is their 41st year and it's so great to be back  in the theater to watch movies again.  I'll have more titles posted next week.  Also, included are other movies I had a chance to watch.

The Strangest Girl in the World

This charming family fable focuses on Melien a young outcast who is shunned by her peers and misunderstood by her mom because of her love of monsters and ghosts. When she starts seeing the art of her stories manifest into real things. She’ll have to use her wit if she wants to protect those she loves.  Watching this, I was surprised that Guillermo Del Toro wasn’t executive producer because this feels very much something he would enjoy.  While the plot is pretty basic and feels like something I would find on countless sitcoms.  All the actors do a good job in their roles.  From the mean girls at the school to Melien’s overbearing mother, all are pretty good in this feature.  The only thing that drags this movie down a bit is the pacing.  There are a few scenes including one long dialogue with Melien’s grandfather that bring the momentum of the movie down.  I also wish that the confrontation of the lead characters were resolved a bit earlier so that their quest to defeat the monster was longer than it was.  Other than that it’s a charming movie that could serve as a little kid’s first introduction into horror movies.

The Art of Making It

Before I begin I should stress the fact that I know nothing of the art world, zero.  I only know about Banksey because I watched that one documentary and I don’t even remember the name of it.

Kelcey Edwards’ documentary about the struggles artists face to have their work seen by the public rather than private buyers has a good message that feels lost in its delivery.  One of the main points is that there is no Government funding for the arts  here when many other countries have one.  I wish the movie dug into why this happened and what can be done to fix it.  Also, the movie establishes that during Covid a lot of galleries lost money because no one could visit them.  Many artists lost funds because they could not put on a show.  Couldn’t these artists network with each other and help put on a show themselves.  There is an art museum that I do need to visit more often than I do.  The documentary makes a good point that if everyone just throws in five bucks we could help save art galleries.  I just wish the movie made the message a little bit more clearly. Because all I saw for two hours was just complaints instead of action

Doctor Strange in The Multiverse of Madness

Sam Raimi returns to the MCU in this sequel which has Doctor Strange protecting a young girl from the angry Scarlet Witch.  Who is hell bent on using the girl’s power of navigating multi verses to connect with the children she created. (Watch Wanda Vision for more info on that).  The movie made be one of the shortest in the MCU at  two hours and six minutes and while Sam Raimi’s name is attached to this.  I only saw his style in some scenes instead of the whole movie.  The Spider-Man films from the early 2000’s all featured his trademarks throughout the movie.  Doctor Strange 2 felt like the original director (Scott Derickson) came on and was fired halfway through production.  The last 30 minutes are among the best in my opinion.

The Unbearable Weight of Massive Talent. 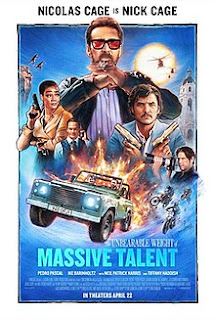 Nicholas Cage plays himself in this very fun feature that is enjoyable to watch because of the references to his other features.  I just thought the overall plot of him being caught up in this spy plot to reveal the location of a drug lord was a bit much.  Still a fun time watching and if you can get a group of people together to see it.  All the better.

A young girl finds a large egg and decides to care for the creature inside it.  This body horror feature from Hanna Bergholm is fun in parts, but I was so frustrated with the ending.  I don’t know if I should recommend this or not.  The mother in this is horrible and the way this poor girl gets manipulated by her is terrible.  I really wanted very bad things to happen to her and I never got it.  Maybe the English remake will have a better ending. 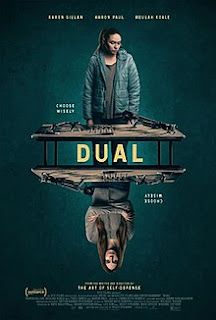 The funniest movie of 2022 by far.  Karen Gillian plays a woman who finds out she’s dying and in this world.  You can clone yourself so that your loved ones wont have to feel any sorrow.  Complications arrive when our lead’s incurable disease is somehow cured and her clone is no longer needed.  You see if a clone chooses not to be “retired”.  They can ask to challenge the original entity to a duel where both will battle in a arena to the death.  There is a lot of dry dark humor and I loved every minute of it.  At my theater only 3 of us were laughing and a few walked out.  Not for everyone but if you love odd, weird dark humor.  This is for you.

This short feature from Vicente Torres isn’t bad for a short but it’s very confusing.  Ok so it starts with this guy who is about to cut into a guy he just killed.  It cuts to the title card in red and the camera pulls back to reveal that we are in a kitchen with a mother and daughter.  The daughter doesn’t want to eat and so she goes to bed.  During the night a burglar breaks in and threatens the girl that he’ll return if she squeals.  The next morning she tells her mom that a guy broke in to the house but he is not there because she ate him.  We than cut back to the guy who was about to cut into another and it’s revealed that this is the girl’s father.  He’s hunting humans to feed to her.  I’m confused because why didn’t we hear any screams come from the house when the window was left opened and why was there not any blood on the girl if she did eat a raw human.  I get the mom takes sleeping pills and so she could sleep past certain things but as an audience.  I think hearing the struggles in the home would be very creepy. 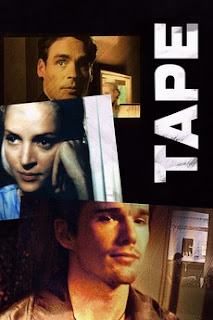 Filmed in a small hotel room with only three actors.  This drama from director Richard Linklater focuses on a reunion between three friends where someone exposes another one’s crimes of the past.  Or was it one.  I love love love movies where it’s just people talking but only if script is good and the actors talented.  The script by Stephen Belbar is clever in the way things are revealed about each character as the story progresses.  The acting by Ethan Hawke, Robert Sean Leonard and especially Uma Thurman are all fantastic.  Linklater shot this right around the time he made Waking Life and it’s one of the first features I remember being shot on digital.  This is now playing on the Criterion Channel.