Giant From The Unknown 1958 (Written Review)

Giant From The Unknown 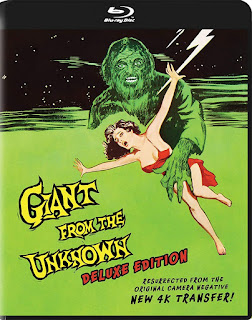 Giant from the Unknown is a very schlocky B horror movie made with love and devotion that I can’t really get mad about the outcome of it, despite its flaws.  The premise of a Spanish warrior whose body gets revived and now seeks revenge thanks to an Indian tribal curse is something we have seen before.  It was used as plot points in the horror classics Poltergeist, The Shining and many more.  What I appreciate most about this movie is that at the time of release.  Westerns were still a big thing and a lot of those shows had the Native Americans focused as the bad guys.  So to have this movie say to American audiences at that time that these are consequences for stealing the land of people who were here first is a kind of a bold move.

The story takes the small town of Pine Ridge.   A local was killed in the same gristly matter that has happened to many  of the livestock in the area. A Native American by the name of Indian Joe warns them of a tribal curse but he is kicked out by Sheriff Parker(Bob Steele).  We than meet geologist Wayne Brooks(Ed Kemmer) who meets up with Dr. Cleveland(Morris Ankrum) and his daughter Janet(Sally Fraser) who are going to study up at Devil’s Crag  where the murder took place.  Being attracted to Janet, Wayne agrees to assist the doc in his studies.  Parker confronts Wayne and blames him for the murder because he saw him and the deceased have an argument before the movie even began and we all know that when people have disagreements in these stories.  One of them is most likely is going to kill the other.   While the three do their research, Our giant from the unknown(Buddy Baer w/ credit to Jack Pierce for makeup) rises from the ground to seek his vengeance.   Will they stop him from killing again? Will Wayne clear his name, and will he get the girl?   You’ll just have to watch and see. 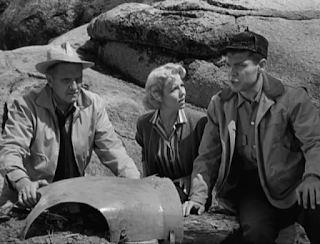 There is a lot of charm in early sci fi films and this was due to most of them being shot in black and white.  One thing I love about movies being shot this way is the atmosphere it sets.  There’s this sort of lighthearted charm within this small mountain town(despite the racism by only a select few) that is nice to watch.   Seeing Wayne innocently flirting with Janet in front of her dad was cliché but also cute in a lame kind of way.  I also liked that even though Janet is treated as the damsel in distress throughout most of this.  She is the one to first discover the site where the giant came from.  Plus I can’t help but love a movie that fades to black when a kill happens is the most terrifying thing to happen.

At 77 minutes this is a very short watch and something you could easily watch in an afternoon.  There isn’t much action with the giant and he only appears more towards the end of the film.  While not a great movie, I wouldn’t call this one bad either. In the era of when drive in cinema reigned supreme.  I could easily see this being played on a double feature with The Creature from the Black Lagoon.   That feature was in my head while I watched this one.  That one had many of the same tropes and characters as this one, but I liked that it tried to somewhat  empathize with the monster.  Giant from the Unknown has no such interest.  The only goal is to have its monster show murderous rage and nothing more.   While I liked the filmmakers making comments about us stealing land from the Natives.  It never really goes anywhere in the story and is forgotten as a plot point.

The extras that came with the blu-ray by The Film Detective were fascinating and I plan on rewatching it with commentary by film historian Tom Weaver and co star Gary Crutcher who played the teenage boy Charlie Brown later on.  Young filmmakers should watch older titles if they ever want to be better at their craft.   While it may be easy to just discredit this as nothing more than a forgotten B Movie feature.  I could easily see how this movie has influenced features from other science fiction and horror directors. 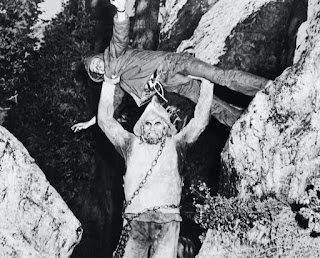 Email ThisBlogThis!Share to TwitterShare to FacebookShare to Pinterest
Labels: cinema recall, giant from the unknown, movie review, poltergeist, sci fi, the creature from the black lagoon, the film detective, the shining