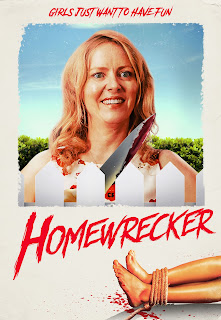 There have been many movies that have dealt with obsession involving women.  Titles like Single White Female, Inside, and  Ingrid Goes West are ones that come to mind.   Homewrecker wants to be a darkly comic tale with elements of horror among those same films.  While it has a good cast and the story has merits  It ends up just being OK.

When we meet Linda(Precious Chong).  She is starring intently at a young woman named Michelle(Alex Essoe)at her local gym. The two ladies meet afterwards and strike up a conversation.    After being impressed that she is an interior designer.  Linda invites Michelle over to check out her place for a possible contract job.  Michelle doesn't want to seem rude so she accepts  While over at her place we learn that even though Linda has a lot of confidence she is very much alone.  Michelle has a husband and some friends but doesn’t have the confidence to say what she  truly feels.  So instead of just being honest and tell Linda she doesn’t want a drink.  Michelle knocks it out of her hand.

Right from these early moments we can see that there is something off about Linda.  Yes she is very nice but there is something off putting about her whole conversation with Michelle.   Huge red flags go off whenever anyone is that bright and chipper around me and there are no drugs present.   Linda seems way to interested in Michelle’s marriage and her doubts about having a baby.  If I was her I would have not agreed to get in her car much less her house.

After agreeing to watch an 80’s dance classic.  Michelle tries to leave but Linda knocks her out and locks her in a room.  For  the next several minutes we get some of the usual tropes.  Michelle escapes for a little bit but then Linda has the upper hand and locks her back up again.  During their fights it’s clear that none of them had any stunt doubles so the action sequences look kind of amateurish.  There is one scene of extreme violence that feels out of place and wasn’t needed at all.

Both actors do a really good job with their roles and I fully believed their characters as real people as I watched this movie.  Essoe and Chong both worked with director Gayne  on the script and all of their dialogue felt authentic.

I first saw Alex Essoe in the horror movie Starry Eyes and was really impressed with her role in that.  Later on I saw her as Wendy Torrence in Doctor Sleep last year and was blown away at how much she looked and sounded like Shelly Duvall from Stanley Kubrick’s version.  Her character of Michelle is someone that is very passive at first but through the trials that Linda presents becomes much  more confident and stronger.  It’s a good performance but the real stand out is Precious Chong.

I looked up Precious Chong on IMDB and although I recognized the movies she was in(L.A. Confidential, Pearl Harbor)  I didn’t remember the roles she played.  With Linda, she made the character very sympathetic.  Here is a woman who was once very popular and very beautiful but as time went on.  Her looks began to fade and the people who were once her friends began to change.  She want very much to connect with the youth of today but can’t stand how everyone is constantly on their phones.  There is another reason why Linda goes through all this trouble with Michelle but Im not going to spoil it in this review.  Once you see what it is, it makes sense in a way but I wish the end result was something different.

Zach Gayne does a good job with the performances of the two leads but I didn’t much care for the look and style of it.  Split screen can be a really effective way to show the perceptions and motives of two characters at the same time.  While Homewrecker does use it effectively in some scenes other felt like overkill.  I also didn’t understand why he kept cutting to an insert shot of water with pink bubble bath.  It was a cool visual for the opening credits but not needed in any other part of the movie.

From the very first frame I thought that Linda was going to be our audience avatar.  We see a close up of her face after the credits and I thought she had eyes for her instructor but as the scene moved on I saw she was checking out Michelle.  When the two ladies meet the perception seemed to change from Linda to Michelle when it really should have stayed with just the one.

For a run time of less than 90 minutes it was a fun movie.  I would say that the best thing about it would be Alex Essoe and Precious Chong.  They have a good collaboration with eachother, but if you do want to watch something involving two women in a cat and mouse scenario go watch Killing Eve.