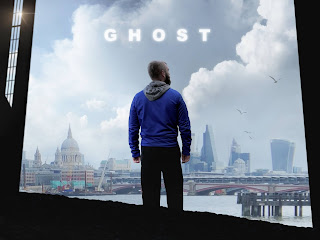 **NOTE**
This review does contain some small spoilers.
Some of us have done things in our past that we are not proud of.  Everyone is bound to make mistakes at some point in our lives.  It’s how we learn from those experiences that help as grow as human beings.  I believe that a lot of people can be forgiving for the things they’ve done.   For ex con Tony(Anthony Mark Streeter) his 2nd chance at a new life comes when he is released from prison.

It’s unclear at the start what Tony was in prison for.  He’s an older gentlemen of  I'd say his early 50’s and as he exits the building.  There is a look of not relief or happiness but of uncertainty and confusion.    Tony has gotten used to a certain routine while inside and now that he is free.  He knows that life will be very hard for him.  He goes to visit his ex wife Valerie(Emmy Happisburgh) but she is too scared to  even open the door.  Was he in jail for murder, did he do something really horrendous, I don’t know.   As he walks along the river, he meets up with his son Conner(Nathan Hamilton) and the two catch up.  His son is a decent enough guy but does have the same violent streak his old man once had.  After a group of thugs start hurling insults at his dad at a local gym, Conner stands up to them.  Later on when he finds out his girlfriend is pregnant.   Conner becomes jealous of one of her male friends and even brings his dad with him in hopes he will help hurt him
As the story progresses, Tony meets up with a former worker named Dominic(Russell Barnett) who very much wants him back in the life of crime they have started.  He refuses and just wants forgiveness for getting Dom’s son Charlie involved with a fight that took his life.  It turns out that one night after big heist or some other criminal act.  Tony and Charlie go out to celebrate and get really drunk.   They end up picking a fight, the kid had a knife and in the scuffle I’m assuming that Tony accidentally killed him.  So while he has sworn off drugs and alcohol.  Dominic has decided to spiral further and further down the path with higher uses of cocaine.   Later on Conner brings Tony back to his old house in the hopes to have his mom forgive his dad for the things he’s done.  But while there, Dom sends the same thugs who harassed Tony at the gym before to meet up with him for what looks like a final confrontation,

The actors in this all do a great job and I love the rhythm of dialogue that is used.  I really enjoyed that it doesn’t have any one saying super witty things to each other and I appreciate that it shows characters thinking about what they are going to say before they say it.  While I didn’t like the choices some characters made.  They still felt like real people to me.  Anthony Mark Streeter and Nathan Hamilton have really good chemistry and I wish the movie had a bit more scenes with them.  The character of Dominic played by Russell Barnett was a complex one that I also wanted a bit more time with too.  In the first scene I see him, he wakes up in his office and does a line of coke right away.  He is obviously homeless and is clearly sad about something and he seemed to be more than just your average goon in most movies.

The way the movie is shot is another thing I will praise it for.  I love how director Anthony Z James frames a shot to have all his actors in frame to avoid the heavy use of editing.  All the cuts are organic and I really liked how the camera glides in this film.  The only time I really noticed any hand held shots was during the really intense moments at the end.

If I had any complaints about the movie it would be that certain disputes or arguments between characters were solved way too quickly.  After Conner accuses his girlfriend of sleeping with another man.  When he meets up with her the next time, he apologizes for being an asshole before but they never discuss the event or the baby for that matter either.   After Tony’s ex wife Valerie doesn’t open the door in the beginning.  I was assuming some really big fight when he does show back up with Conner later on.   But no in like less than five minutes she has forgiving him and they are all sitting around eating pizza.  There should have been more of a  build up to those moments of forgiveness and for me they felt too fast.   I also don’t understand why it’s called Ghost:Ex Con Redemption.  There didn’t seem to be any character that was called Ghost and if there was I didn’t hear it.  Couldn’t have this just be called Redemption An Ex Con’s Story.

At under 90 minutes there is enough in this movie for me to give it a recommendation.