A woman hires a documentary crew to help investigate the mystery of her husband who disappeared while on duty. 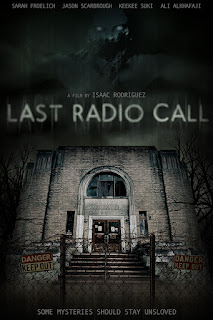 The found footage genre which first became widely noticed in horror films like The Blair Witch Project is one I very much enjoy if it’s done right.  The problems a lot of directors make when filming these movies is that they forget the logic of the camera and how it relates to the characters holding it.  I’m looking at you later Paranormal Activity Sequels.   The best approach to doing found footage is to do what Issac Rodriguiez did and make it a documentary.

When we meet Sarah(Sarah Froelich) she is distraught and depressed over her husband David’s (Jason Scarbrough)disappearance and has even turned to consuming a large amount of alcohol to numb her pain.  All she has was footage from his body cam when he and another officer investigated a disturbance coming from an abandoned hospital.  No one else including David’s former partner or Police Chief want to help Sarah with her investigation.  So with the help of a film crew and a few witnesses, she is going to find out the answer to what happened to her lover.

The movie begins with this very cool first person POV that shows us clips from David’s body cam.  It’s a neat little aspect that reminded me of playing horror video games like Silent Hill.  There were a few moments that made think.  If this was a video game and we are portraying the crew or even Sarah who is gathering clues.  This would be a very solid and creepy game. There are scenes that would scare me if I was the one controlling how the character moves.  The documentary like approach to the story was still good and it was fun watching each clue get revealed and learning things about why the hospital shut down.  I just wish it explained a little more of Sarah and David’s relationship. As the movie went on I  found myself not really caring if she finds find her husband or not.

I understand that Sarah is unable to move on because she wants an answer and getting drunk is her way of coping with the turmoil of not knowing.  It would help me understand her obsession more if it showed me scenes of David and Sarah together.  Either in an old home movie or a Skype call, something to show me that these two were in love and losing someone can cause a person to become so obsessive.  This would make the events of what happened at the end more profound for me.  Just having a character say she loves someone is not enough for me.

Issac Rodriguez wears a lot of hats in the production of this film and my full respect goes out to him because he is able to make a fun horror movie with a small budget.  The makeup effects by Makayla Rodriguez and Diana Rodriguez are also very good and bring the enjoyment level up for me.  The supporting actors along with the nice pacing made The Last Radio Call a decent watch.