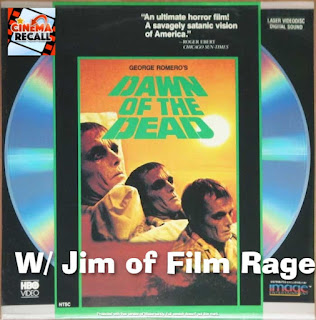 I heard that when there's no more room in hell, the dead will walk the earth. But On Cinema Recall, I say let the dead roam wherever it damn well wants to.
On this episode, I'm bringing with me Jim of Film Rage to discuss the masterpiece of horror that is George A Romero's Dawn of the Dead.  Released in 1978 and focusing on a group of survivors who hold themselves up in a shopping mall.  This movie is not only a great zombie movie, but a brilliant satire on consumerism as well.
Listen to Jim and The Vern talk about this movie and later perform a scene in an all new audio drama adaptation.
Ad Spots by
Great Pop Culture Debate
Piecing it Together
Closing Song
Digital Versicolor by Glass Candy