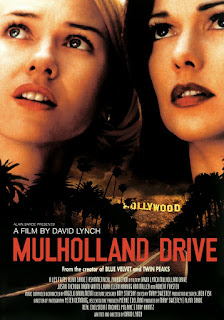 It's a new month which means it's time for a brand new series here at Cinema Recall.  For the next few weeks and even longer, we will be discussing and analyzing David Lynch's mystery of a movie, Mulholland Dr.  starring Naomi Watts, Justin Theroux, and Laura Elena Harring.

To help solve the riddle of this  movie , The Vern is going to be bring on his good friend, Jason Soto of the podcast Whatever with Jason Soto to help decipher this mystery. At times they will need help so on upcoming episodes they will be joined by Ryan Louis Rodriguez of Reels of Justice as their Mulholland Dr Expert.
Take a listen to our intro episode where Vern and Jason discuss how they were introduced to David Lynch, talk about the TV pilot and mention some of their favorite films he directed
Email ThisBlogThis!Share to TwitterShare to FacebookShare to Pinterest
Labels: cinema recall, david lynch, jason soto, justn theroux, laura elena harring, movie review, mulholland dr, naomi watts, podcast, reels of justice, ryan louis rodreiguez, whatever with jason soto