Videos of The Vern doing Various Things of Value. 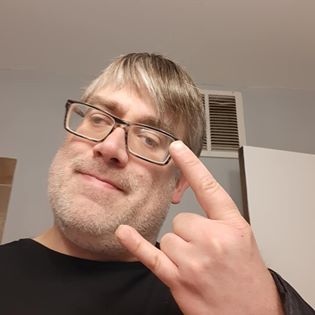 Cinema Recall is on a bit of a hiatus and won't be posting any new episodes until next month.  Now, I do plan on releasing episodes that were currently available on our Patreon page to everyone on your favorite podcast player so be on the look out for that.  If you are a member you will still get bonus shows on our Patreon site so be sure to check that out too.  Just not as often, so please be patient.

What I am going to do today is share many of the times I have appeared on video for your enjoyment. Many of the vids will feature me playing drums for the few bands I was in. Along with videos of other great local bands I filmed in Minnesota. There are also several videos of me including one of yours truly doing and saying stupid things.(there is another but it goes on way too long so it's not included here).  I also post my guest spots on the last two episodes of the awesome game show Are You a Movie Oracle.  Along with my 1st and only acting experience so far.  I'm not ashamed of them and I find a certain level of clarity re watching films of your youth.  You get to see how you were in the past and how you are today.  This is a collage of my past and I enjoyed my time being in these videos very much.  I hope you enjoy watching them.

Cover of Punk Rock Girl(Dead Milk Men) by Victory Riot  Note *** You can't see me but you sure as hell can hear me.

Vivian and The Vern.  Note*** We improved this whole entire set

Taint by Scale of None.  Yes that's me on vocals too
Edina by Scale of None
I fall flat by Scale of None *** I like this song because it sounds nothing like the other two.
Audio Only Tracks. These next three videos are just audio only demos I was recording in a friend's garage. and than I recored them back through my phone. Sorry about the quaity
Are You a Movie Oracle   I was a contestant on this very fun and informative game show hosted by Ashleigh Dana
1st Challenger   Ryan L Terry of Four's a Crowd
2nd Challenger -  Kolby Mac of Kolby Told Me So
Random Videos featuring me.
The Vern doing a "7 Seas" shot
The Vern's Rant about Geico and Mrs Butterworth
The Vern's Whisky Challenge Sunday. **Sorry about the quality**
The Demented Tower: The Movie. I visited some friends in Chicago and while there we filmed a short movie. My role is brief and while the quality isn't great. This was a fun time
Dork Points Vs Cinema Recall: Robocop(1987)
Silent Review of City Lights(1931)
Random videos of other bands I shot
Interlocking Plastic Toy Bricks by Fuzzy Machete. *** Even though this video in nothing but still images. If you listen to the lyrics, it becomes very funny.
Gorilla by The Stondest
Honey Dick: Live at Palmer's Bar **** Wish I knew the name of this song because it is really good. Also wished I recorded the whole song too***
Cover of Dammit(Blink 182) by The Von Tramps
Let Me out by The Wine Soaked Goliards. *** Fans of Rick and Morty will recognize this song ****
Minnesota Music Machine: Sweet 69( Babes in Toyland cover w/ Nicole of The Stondest)
Email ThisBlogThis!Share to TwitterShare to FacebookShare to Pinterest
Labels: babes in toyland, blink 182, cinema recall, comedy, drums, geico, live music, movie reviews, movies, scale of none, the vern, whiskey