The Vern's review of I'll Be Around. 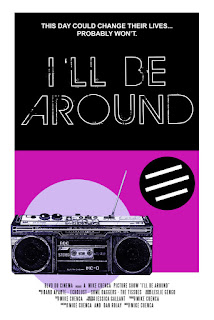 If there ever was a movie that shows what my social life with friends was like, It’s this one.  Watching the characters in this feature reminds me of friends I have, stories from people I know and even myself at times.  I have played in bands before and there were a few similarities in this that were quite funny and bitter sweet when looking back. Although I am reminded highly of Richard Linklater’s debut Slacker as I watched it.  Mike Cuenca’s I’ll  Be Around doesn’t have quite the same structure.  Instead of going from one character’s interactions with another to a totally new situation with all new people.  Mike Cuenca gives you multiple stories and character archs in this epic that sort of plays like a punk rock version of Magnolia by Paul Thomas Anderson.

The stories happening in I’ll Be Around are all set amongst the backdrop of music festival happening in an unnamed city.  To be fair it probably has a name, but I like to think of this place as being my city and yours when you watch it.  There is the story of a girl who wants to play her own music but is stuck at the merch table.  The tale of a man who owes his producer fifteen thousand dollars otherwise his songs are deleted.  We watch two people who are perfect for each other never meet and a couple who like to break into musicians’ homes when they are not around and steal things. Plus the ever awesome tale of underage kids who seek the help of an aging rock star to help them sneak into the show. 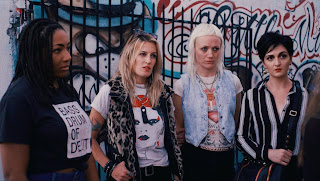 These stories and more are for the most part balanced out really nicely by Mike Cuenca.  He does a good job at making sure the audience doesn’t get lost when going back and forth from one character to the next.  I just wish he had someone else help edit the film with him.  There are moments that go on a bit too long and some scenes that should have been removed.  When you edit something you directed, I can understand why you want to leave in everything you shot.  Yet another pair of eyes would have made this a perfect movie.  It’s like having an awesome party at your place that you enjoy very much but it’s late and you just want to go to sleep and everyone is still there.  If this was trimmed down to an even 90 or 100 minutes it would be golden.

The actors in this are all really great and I only recognized some in small cameos like Jonah Ray(Mystery Science Theater 3000)  and J Mascis (Dinosaur Jr).  The actual ones with story archs are pretty amazing and I hope this movie gets those all involved more roles in the future.  The stand out for me was Sarah Lawrence who plays the role of Eve Valentine a once famous rock star who is part of this music fest.  She has both a lot of regret and sadness but also a lot of love and optimism too.  Her face alone displays a wide range of emotions throughout this movie and it’s quite astounding.

The way it was shot by cinematographer Jessica Gallant is quite impressive as each storyline has it's own look and style.  There are some great concert footage that reminded me so much of the places I played at with it's use of lighting.  Even though I probably have not set foot in that actual building.  The music from all the bands but one are really good and I hope this has a soundtrack album released for it.

I’ll Be Around is a fantastic look back at some of the most amazing times in our youth that will become as Eve Valentine says just fading memories.

StoryWorth is the easiest way to privately record your family stories and print them in beautiful hardcover books.  Save $20 off your 1st order on link below