Reviews of Resurrection and She Will (MSPIFF 41)

Hello Everyone.  I the Vern am back with a review of two movies I saw at the Minneapolis/ St. Paul International Film Festival. 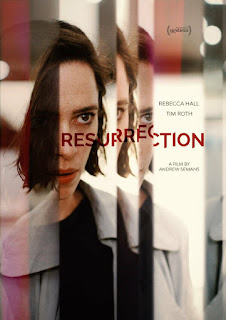 Trauma can have very long lasting effects, especially when it comes to the victims of unfathomable violence.  It’s clear that our main protagonist suffers from something very upsetting from her past but I’m very unclear on what’s real or what isn’t in this psychological thriller.

Margaret(played by the amazing as always Rebecca Hall) seems like a successful woman.  She has a great sex life, good job, and a daughter going off to college soon.  Problems arise for her when she encounters David(Tim Roth) at a work seminar and it triggers a fear so bad she has to leave the room.  She fully believes that her daughter Abby is in danger of this guy, but no one believes her.  Once I heard what happened, I was skeptical too.  The movie does a great job at balancing the suspense of is she telling the truth or isn’t she.  This is due mainly to the amazing talent of Miss Hall.

I only wish that the ending was more ambiguous and didn’t give audiences a direct answer.  Sometimes that can be annoying but here I think it would help.  I’m not entirely clear but the message of the story feels like a statement about how a lot of people don’t believe a woman’s story about past trauma.  Even her daughter Abby(Grace Kauffman) has her doubts as well.  When Margaret tells what happened to a co worker.  It sounds so ludicrous that you start to think that maybe she is losing her mind.  It’s only after her final encounter with David do we get the truth revealed (In a very gory scene that my audience and I was not expecting). I would have liked this scene if we didn’t see everything but only heard things instead.  There could be a great debate on if she is telling the truth or not. Others may disagree and those opinions are extremely valid.  It just feels like the movie is building up to have an ending that is ambiguous only to have everything spelled out was a misstep for me.

The cast are all great here.  This is the best performance by Rebecca Hall since Christine.  Grace Kauffman shines in the role of Abby and stands slightly above Hall in some scenes.  Tim Roth is good but I never got any creepy vibes from him as I was expecting to.  He just seems too damn likable to me.

* Out of Five Stars

A young nurse travels with her patient to a healing retreat only to discover that the place harbors more things than she was expecting.

The only thing I knew about this movie prior was that it was produced by Dario Argento (Deep Red, Suspiria) and so I knew that it was going to have some sort of horror element to it and that’s it.  The movie has a slow burn to it and as much as I love movies that do this.  I don’t think this one handles it very well.

We learn that Veronica(Alice Krieg) is at this retreat after her mastectomy surgery.  Her nurse Desi(Koba Eberhardt) starts to uncover things about her past including a very problematic relationship with a filmmaker Hathbourne(Malcom McDowell)  As the investigation continues, she finds out that her patient has powers that are a lot stronger and more violent.

Despite the good acting from everyone, this was a chore to sit through.  If I had a bit more understanding of the character’s back story(especially Desi).  I would be into this a lot more.  This would make a great thirty minute short because there are a lot of moments where it just seem to show shots of nature than tell a story.  The movie does have some cool effects near the end but I found myself checking my watch more than watching the movie.