Hello everyone, The Vern here and today I am communicating with you through the wonderful world of the written word.   I usually talk to you on the podcast but today I'm going to speak to you in this article.  There are a bunch of movies that I saw last month, and here are my quick thoughts on them. Majority of them are available on Hulu 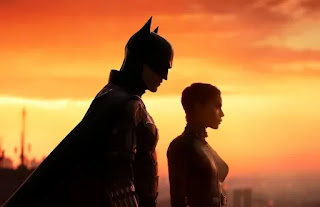 Director Matt Reeves took a page from David Fincher’s thrillers from earlier and has adapted them into a Batman story.  Gotham city looks very close to the setting of Seven and the costume of The Riddler is almost identical to what the killer wears in Zodiac.  Even though this is a new story, it feels like a continuation from the trilogy that Christopher Nolan made in the early 2000’s.  It does away with the elaborate costumes and make up(except Colin Farrell who in unrecognizable as The Penguin) to bring viewers a more gritty, realistic version of the caped crusader.  The result is a very fun and engaging movie.  The three hour long runtime flew by quick and I never wanted to leave my seat. Robert Pattinson as the lead was very good and probably the best Batman since Michael Keaton.  Paul Dano was freaking creepy as The Riddler and even though he doesn’t have much screen time.  Colin Ferrell does great as The Penguin.  The only downside was Zoe Kravitz as Catwoman(in the credits she is called Selina Kyle but she is clearly Catwoman).  She is not a bad actor and I liked her performance.  It’s just that I never once bought her as the character.  This character is suppose to be a con artist.  A woman that uses her sexuality and intelligence to dupe and destroy most male egos.  Here she trades in her skin tight leather for a homemade knit mask and while I understand that some take issue with the over sexualizing women in media.  With Catwoman, sexuality is her power.

While I did enjoy this very much, It just didn’t feel like Batman to me. I’m fully aware that this is a generational thing and I accept that.  In another 15 years, we will have another version that will discuss the topics of that time.   You could have an original story with all new characters but if you did than no one would watch it.  People want to see something familiar when it comes to spending money at the movies.

Do not read any plot descriptions about this movie and just go into it cold.   Even the trailer reveals too much in my honest opinion.  Honestly I think A24 should have been the studio to release this because they could get away with having a vague trailer.  This is a tricky movie to market and even trickier to describe without any spoilers so Im going to do my best.  A single women(Daisy Edgar Jones) is just sick and tired of dating has met an incredible man(Sebastian Stan) who has invited her up for the weekend at his place up north in the wilderness.  When they get there things don’t turn up like they have planned.  That’s all Im gonna say, watch it 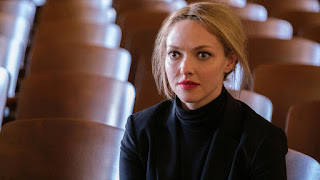 I’m only 3 episodes in but I found this series to be very captivating.  It’s all about Elizabeth Holmes who was charged with criminal fraud for creating this system that would check your vitals from a single drop of blood.  The catch is that the machine never worked and yet this woman got funding from everywhere.  Even the very top people in politics were on the board.  This woman was seen as a hero to many young women and at the end she turned out to be nothing more than  a crook.  Amanda Seyfried does a stellar portrayal of Elizabeth Holmes in the show. Based on the true crime podcast of the same name 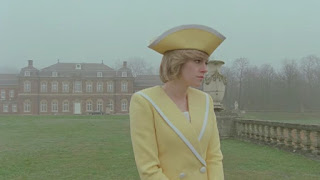 Kristen Stewart is really good as Princess Diana in this film from the same director of Jackie (Pablo Larrain) but for me it didn’t pack as much punch as that movie did.  It is a beautiful movie with stunning cinematography by Claire Mathon and great music by Johnny Greenwood.  I was just never fully invested in the story.  At times it took on the tones of  Stanley Kubrick’s The Shining  with it’s use of tracking shots and being set in this huge house.  I would watch again but maybe just to watch the visuals. 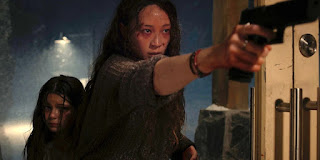 This thriller is about a young woman in rehab who gets news that her mother may be dying.  Despite disagreements from the other family members and a freaking blizzard.  She pushes on only to be turned away to a rest stop because the roads have closed.  At the location she comes across something chilling as there is a young girl tied up in a van.  Now she has to discover the kidnapper and make an escape with the child.  This wasn’t bad but I feel a book could do so much more with this story than a movie can.  A book can go into more details with the characters that you will never get with any other movie 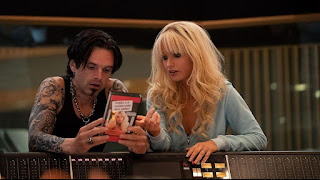 This truth is stranger than fiction is all about the infamous sex tape between Pamela Anderson and her husband Tommy Lee. The series was created by Robert Sigel(The Wrestler) and the fist few episodes where directed by Craig Gillespie who has done another great biopic with I, Tonya back in 2017.  Lilly James as Pamela Anderson is phenomenal.  I didn’t even recognize that this was the same love interest in Baby Driver.  Sebastian Stan as Tommy Lee may not look exactly like the Motley Crue drummer but he as the voice and the mannerisms down flat.  Add in Seth Rogen , Nick Offerman, Andrew “Dice” Clay to the cast, some fun needle drops, excessive nudity from both male and female and you have a very good show