Review of Slashening: The Final Beginning.

In 2015, I got sent a link for a new horror comedy called The Slashening and it was a very fun movie that explored a lot of the usual tropes found in slasher classics.  It was about a group of girls having a party, that gets interrupted by a psycho wearing a mask.   Yes, I know that it sounds like every other movie and I agree with that.  However, It belongs on the same list for other great meta horror movies like Cabin in The Woods, Scream and Behind The Mask: The Rise of Leslie Vernon.  You can read my thoughts on that flick by visiting my old site below.

The Vern goes to a party and reviews The Slashening

Now five years have passed and the slashening begins again.  The story takes place in this support group of  people related to or were involved in the previous movie that I mentioned earlier.  Even Pat(Patrick Foy), the nice guy who got his dick cut off in the first movie returns to be the main host for this group. 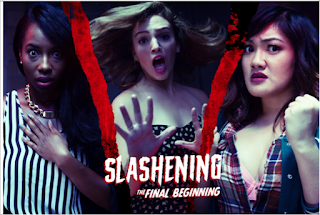 Our main character for this sequel is Maddison(Addie Weyrich) whose dad owned the pizza delivery service that sent many drivers to their death in the previous movie.  One of the victims was her own brother and this support group filled with other relatives is a good way for her to heal.  The only downside is that there is another killer that is offing others in the group.   So what's a girl to do now.

Slashening: The Final Beginning starts of great with a scene of a couple that has moved into the same house where everyone was killed in the first movie.  They are having friends over and are recapping what happened before.  Than when the killer does show up, each kill moment gets more ridiculous and  even funnier.

When we move from that to the support group, and our killer is now stalking these types.  It was good but not as good as the original.  I liked that it's focus was on relatives of the pizza delivery drivers because they were part of the many funny visual gags in the other Slashening.   But I wasn't a big fan of these characters as I was in the previous movie.  In that film, the girls had more of a back story and that was sorely missing from the characters in this sequel.   Having Pat return made little sense as well.  The joke of him being the nice guy was played perfectly in the original but in this one.  It was pathetic to the point that he should have been killed off way earlier.  Not to dismiss his performance which was good but the character wasn't needed in my opinion

The movie does have some great segments including one when the killer takes out some spoiled trust fund brats and another which takes place at an art show involving a stripper.   The camera movements in it  reminded me so much of It Follows as well as Paranormal Activity 3 just amped up to bizarre levels. 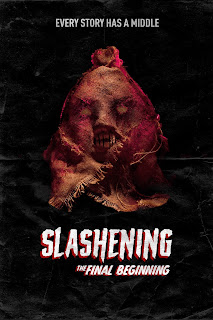 Slashening:The Final Begining has some great effects and some funny enough jokes to warrant a re watch from me, but I highly suggest check out the first Slashening as well as Fear Town USA before you do.  Both movies can be found on Troma's website below.